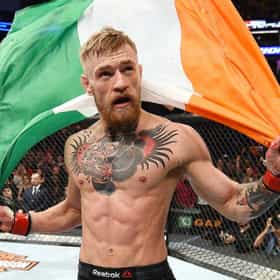 Joe Rogan On All Things Conor McGregor 56 votes Anyone who knows Joe Rogan knows just how passionate he is about the UFC. Joe’s worked as a backstage interviewer and UFC an...

Conor McGregor is ranked on...

#30 of 52 Which Celebrities Will Make A Comeback In 2020? 2k VOTES With reunion tours and highly-anticipated movie sequels already announced on the 2020 calendar, it looks like there will be ...
#179 of 188 The Best Boxers of All Time 326.8k VOTES This list of the best boxers of all time is ranked by boxing fans worldwide. The goal is to determine the greatest boxers ev...
#7 of 20 The Best Athletes Who Retired in 2019 394 VOTES UPDATE: Check out the top athletes who retired in 2020! Which are the best of the athletes who decided to retire in 2019? ...
#12 of 47 Overhyped Athletes Who Still Performed 50.9k VOTES Overhyped athletes who still performed represent a special breed of athletes who captured the attention of fans and critics ...
#7 of 52 The Best UFC Fighters In The Octagon Today 915 VOTES The best UFC fighters right now all have dreams of being considered the best overall MMA fighter in the world. It is hard to...
The 50 Highest-Paid Athletes 73.9k VIEWS   List of the highest paid athletes in the world, professional athletes who make the most money annually. This is For...
Famous People Named Connor 21.5k VIEWS Have you ever realized how many famous people named Connor there are? We put together this list of celebrities named Connor ...
Celebrities Who Support Donald Trump 218.3k VIEWS During the 2016 presidential elections, Donald Trump supporters in the celebrity world were small in number, but vocal in th...
The Biggest Payouts In UFC History 2.7k VIEWS The biggest UFC payday is a goal every MMA fighter hopes to achieve. UFC is clearly the biggest MMA promotion in the world t...