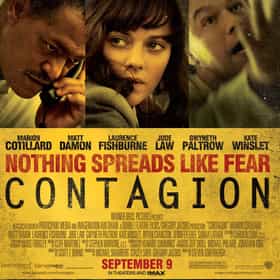 Contagion is a 2011 medical thriller directed by Steven Soderbergh. The film features an ensemble cast that includes Marion Cotillard, Bryan Cranston, Matt Damon, Laurence Fishburne, Jude Law, Gwyneth Paltrow, Kate Winslet, and Jennifer Ehle. The plot of Contagion documents the spread of a virus transmitted by fomites, attempts by medical researchers and public health officials to identify and contain the disease, the loss of social order in a pandemic, and finally the introduction of a vaccine to halt its spread. To follow several interacting plot lines, the film makes use of the multi-narrative "hyperlink cinema" style, popularized in several of Soderbergh's films. ... more on Wikipedia

It Was Overlooked At The Time, But 'Contagion' Is One Of The Most Realistically Scary Modern Films 13.5k views It may seem like just another Outbreak-esque epidemic thriller, but Steven Soderbergh's Contagion is unusually authentic in ...

Contagion is ranked on...

Contagion is also found on...