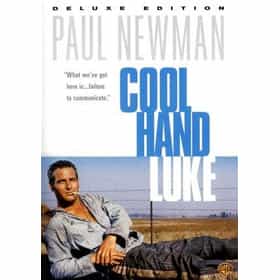 Cool Hand Luke is a 1967 American prison drama film directed by Stuart Rosenberg, starring Paul Newman and featuring George Kennedy in an Oscar-winning performance. Newman stars in the title role as Luke, a prisoner in a Florida prison camp who refuses to submit to the system. The film, set in the early 1950s, is based on Donn Pearce's 1965 novel of the same name. Pearce sold the story to Warner Brothers, who then hired him to write the script. Due to Pearce's lack of film experience, the studio added Frank Pierson to rework the screenplay. Newman's biographer Marie Edelman Borden states that the "tough, honest" script drew together threads from earlier movies, especially ... more on Wikipedia

Cool Hand Luke is ranked on...