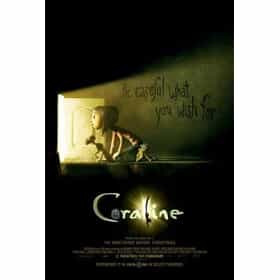 Coraline is a 2009 American stop-motion animated 3D dark fantasy film based on Neil Gaiman's 2002 novel of the same name. It was produced by Laika and distributed by Focus Features. Written and directed by Henry Selick, it was released widely in United States theaters on February 6, 2009, after a world premiere at the Portland International Film Festival. The film was made with Gaiman's approval and cooperation. The film was released to critical acclaim, and made $16.85 million during opening weekend, ranking third at the box office. At the end of its box office run, the film had grossed over $124.5 million worldwide. Coraline won Annie Awards for best music, character design, ... more on Wikipedia

‘Coraline’ Is Even More Horrifying As A Book Than A Movie 5.8k views In 2002, renowned author Neil Gaiman released Coraline, his first work intended for children. The story follows a young girl...
'Coraline' Is A Stop-Motion Nightmare That Still Chills Us If We Think About It Too Long 43.1k views Coraline is one of the most imaginative and entertaining stop-motion films of the century - but it's also a spine-chilling n...

Coraline is ranked on...

Coraline is also found on...