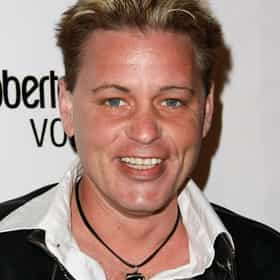 Corey Ian Haim (December 23, 1971 – March 10, 2010) was a Canadian actor, known for a 1980s Hollywood career as a teen idol. He starred in a number of films, such as Lucas, Silver Bullet, Murphy's Romance, License to Drive, Dream a Little Dream, and Snowboard Academy. His best-known role was alongside Corey Feldman in The Lost Boys, which made Haim a household name. Known as The Two Coreys, the duo became 1980s icons and appeared together in seven movies, later starring in the A&E American reality show The Two Coreys. Haim's early success led to money and fame. He had difficulties breaking away from his experience as a teen actor, and was troubled by drug addiction throughout his ... more on Wikipedia

Corey Haim is ranked on...

#972 of 1,149 The Best Actors in Film History 2.2M VOTES The best actors ever are ranked here in this list of the best actors in film history. These are the greatest actors ever to ...
#436 of 931 People who voted for Corey Haim... People in the Northeast are 2x more likely to vote for this People Age 30 to 49 are 2x more likely to vote for this People We Wish Were Still Alive 3.2M VOTES RIP to our world's greatest achievers, those who changed the way we live and the ways we thought. This list of people we wis...
#191 of 311 Which Actor Would You Bring Back for One Final Movie? 182.7k VOTES We asked, you answered. Fans of the Ranker Facebook page chose which dead actors they’d like to bring back to life for just ...
#140 of 226 The Greatest Former Child Stars 418.1k VOTES List of Hollywood kids: actors who grew up on the big screen and child stars you recognize working today. While there are ma...
#19 of 114 People who voted for Corey Haim... also upvote Back to the Future Franchise on The Greatest Movies of the 1980s, Ranked also upvote The Karate Kid Franchise on The Greatest Movies of the 1980s, Ranked The Greatest '80s Teen Stars 230.2k VOTES The greatest teen stars of the '80s are well-remembered on this countdown. They were everywhere; they ruled the box office;&...
Famous Capricorn Male Celebrities 75.1k VIEWS Known for their incredible ambition, it's inevitable that there would be so many famous Capricorn men. To reach the levels o...
Child Actors Who Tragically Died Young 38.4M VIEWS Child actors who died young include some of the most recognizable names in entertainment. All the actors and actresses liste...
VH1's 100 Greatest Teen Stars 55k VIEWS VH1's list of the 100 greatest teenage stars and celebrities of all-time. These teenage celebrities were oftentimes involved...
Famous People Named Corey & Cory 16.3k VIEWS Have you ever realized how many famous people named Corey there are? We put together this list of celebrities named Corey to...
Celebrities Who Went to Betty Ford Clinic Rehab 82.8k VIEWS This list contains information about celebrities who went to the Betty Ford treatment center, loosely ranked by fame and pop...
Noted Celebrities Who Have Filed for Bankruptcy Protection 106.2k VIEWS Top celebrities that went broke is a list of famous people that have had to file bankruptcy. These are the Hollywood stars, ...
Male Celebrities Who Are 5’6" 12.9k VIEWS This list contains examples of male celebs who are 5'6" loosely ranked by fame and popularity. Standing a couple inches...

Corey Haim is also found on...