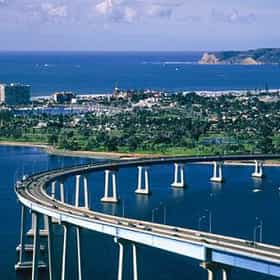 Coronado, also known as Coronado Island, is an affluent resort city located in San Diego County, California, across San Diego Bay from downtown San Diego. Its population was 24,697 at the 2010 census, up from 24,100 at the 2000 census. It is part of the San Diego-Carlsbad, CA Metropolitan Statistical Area. Coronado lies on geographic combination of an island and a tombolo connected to the mainland called the Silver Strand. Coronado is a tied island, connected by a tombolo. In 2012, Dr. Stephen Leatherman, Director of the Laboratory for Coastal Research, ranked Coronado Beach as the best beach in the United States. Coronado is Spanish for "the crowned one", and thus it is ... more on Wikipedia

Coronado is ranked on...

Coronado is also found on...