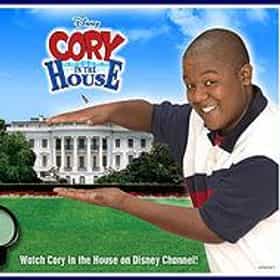 Cory in the House

Cory in the House is a television show, which aired on the Disney Channel from January 12, 2007 to September 13, 2008 and was a spin-off from the Disney show That's So Raven. The show focuses on Cory Baxter, who moves from San Francisco, California to Washington, D.C. with his father, after Victor Baxter gets a new job in the White House as the official head chef. The series marks a Disney Channel first, as it is the channel's first spin-off. This is also the only Disney Channel spin-off series to be broadcast in standard definition for the entire length of the show. Reruns of the series have not been produced on Disney Channel, or on Disney XD; however they continue to air on the ... more on Wikipedia

Cory in the House is ranked on...

#110 of 157 TV Shows Most Loved by African-Americans 90.9k VOTES This list contains TV shows black people love, whether the shows are current or from the past or contain an all-African-Amer...
#10 of 20 The Best Disney Channel Shows of the 2000s 5k VOTES A lot of millennials think the 1990s had all of the great TV shows. However, that quality did not dip in the slightest on Th...
#12 of 51 The Best Family Channel TV Shows 3.7k VOTES List of popular Family Channel shows, ranked from best to worst. This list of the top current and cancelled Family Channel T...
#40 of 87 The Best Teen Sitcoms of All Time 24.5k VOTES The best teen sitcoms serve not only as a reflection of teen life but also an educational tool. They’re filled with moral an...
#48 of 63 The Funniest Kids Shows Ever Made 4.1k VOTES Kids love to laugh. While their parents may try to get them to watch educational programming, kids just want to change the c...
#20 of 32 The Best Black Sitcoms of the 2000s 4.9k VOTES The 2000s were responsible for several incredibly funny black sitcoms that aired on a variety of networks. Although entirely...