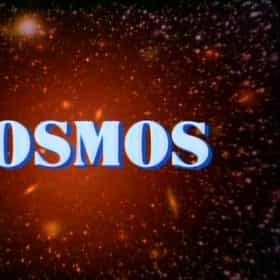 Cosmos: A Personal Voyage is a thirteen-part television series written by Carl Sagan, Ann Druyan, and Steven Soter, with Sagan as presenter. It was executive-produced by Adrian Malone, produced by David Kennard, Geoffrey Haines-Stiles, and Gregory Andorfer, and directed by the producers, David Oyster, Richard Wells, Tom Weidlinger, and others. It covers a wide range of scientific subjects, including the origin of life and a perspective of our place in the universe. The series was first broadcast by the Public Broadcasting Service in 1980, and was the most widely watched series in the history of American public television until The Civil War. As of 2009, it was still the most widely ... more on Wikipedia

Cosmos: A Personal Voyage is ranked on...

#218 of 391 TV Shows That Only Smart People Appreciate 1.3M VOTES Since about the early 2000s, TV audiences have been blessed with what many experts call The Golden Age of Television. In oth...
#83 of 169 The TV Shows Most Loved by Hipsters 29k VOTES List of TV shows hipsters love, currently running and from the past. Perhaps a TV-watching hipster seems like an oxymoron; a...
#19 of 120 The Best Documentary Series & TV Shows 8.2k VOTES The best documentary TV shows make learning an entertaining journey that viewers don’t want to end. After all, who doesn’t w...