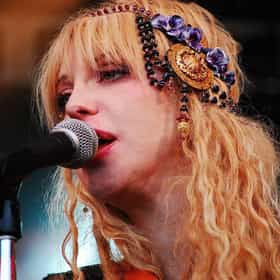 Courtney Michelle Love (born Courtney Michelle Harrison; July 9, 1964) is an American singer, songwriter and actress. A figure in the punk and grunge scenes of the 1990s, Love's career has spanned four decades. She rose to prominence as the lead vocalist of the alternative rock band Hole, which she formed in 1989. Love has drawn public attention for her uninhibited live performances and confrontational lyrics, as well as her highly publicized personal life following her marriage to Nirvana frontman Kurt Cobain. Born to countercultural parents in San Francisco, Love had an itinerant childhood, but was primarily raised in Portland, Oregon, where she played in a series of short-lived ... more on Wikipedia

Courtney Love is ranked on...

Courtney Love is also found on...