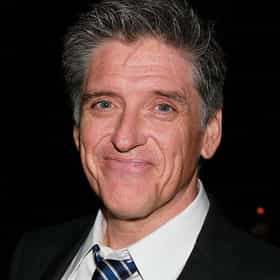 Craig Ferguson (born 17 May 1962) is a Scottish-American television host, comedian, author, and actor. He hosted the syndicated game show Celebrity Name Game (2014–17), for which he won two Daytime Emmy Awards, and of Join or Die with Craig Ferguson (2016) on History. He was also the host of the CBS late-night talk show The Late Late Show with Craig Ferguson (2005–14). In 2017 he released a web show with his wife Megan, titled Couple Thinkers. It ran for six episodes from 9 October 2017. It is available on YouTube. After starting his career in the UK with music, comedy and theatre, Ferguson moved to the U.S. where he appeared in the role of Nigel Wick on the ABC sitcom The Drew Carey ... more on Wikipedia

Craig Ferguson is ranked on...

#194 of 274 The Most Trustworthy Celebrities in the World 895.9k VOTES Trust: the belief that someone or something is reliable, good, honest, effective, etc. When it comes to celebrities, do any ...
#58 of 403 People who voted for Craig Ferguson... People under 30 are 2x more likely to vote for this The Funniest Stand Up Comedians Of All Time 1M VOTES A ranked list of the best stand up comedians in the history of the art form. First and foremost, all of the people on this l...
#908 of 1,041 Celebrity Death Pool 2020 102.3k VOTES They may be beloved performers, award winners, or game changers, but no matter how famous, you can’t escape death. This cele...
#27 of 90 The Hottest Silver Foxes 72.5k VOTES Silver foxes are among the sexiest older men on the planet. A bit of gray streaked into a full head of hair on a man with we...
#486 of 771 American Public Figures Who Are National Treasures 229.7k VOTES America's national treasures work in different fields, are of different generations, and all have different stories to ...
#427 of 452 Famous Role Models We'd Like to Meet In Person 542.6k VOTES These are the famous folks it would be most exciting to meet in person, as ranked by the wisdom of the crowd. Some of the be...
#20 of 61 The Best Scottish Actors of All Time 72.8k VOTES Scotland isn't just about whiskey, it's also the home country of many of Hollywood's top actors. This list of the best Scott...
#3 of 57 The Best Male Talk Show Hosts in TV History 1.6k VOTES Most of the best male talk show hosts are on late night talk shows. From Conan O'Brien and David Letterman to James Corden a...
#21 of 49 The Best Celebrity Impersonators Ever 14.7k VOTES The best celebrity impressionists ever include some legendary comics and impersonators like Rich Little, Will Jordan, and Wi...
#20 of 45 The Best Living Scottish Actors 3.7k VOTES From McAvoy to McGregor, there are tons of amazing actors alive today who all hail from the country of Scotland. Hollywood h...
#29 of 53 Who Should Replace Jon Stewart as Host of The Daily Show? 6.9k VOTES UPDATE: On March 30, 2015, Comedy Central announced that Trevor Noah, The Daily Show correspondent since December 2014 will ...
Celebrities Who Had To Quit Drinking 511k VIEWS List of celebrities who quit drinking. Many celebrities have given up alcohol. Some of these famous people gave up drinking ...
Famous People Named Craig 14.3k VIEWS List of famous people named Craig, along with photos. How many celebrities named Craig can you think of? The famous Craigs b...
American Stand-Up Comedians: The Best Comics In the USA 170.3k VIEWS American comedians are some of the top rated stand up comedians in the world. These are the greatest stand up comedians this...
Famous People of Scottish Descent 41.8k VIEWS List of famous people of Scottish descent loosely ranked by fame and popularity. Many famous people are of Scottish descent....

Craig Ferguson is also found on...