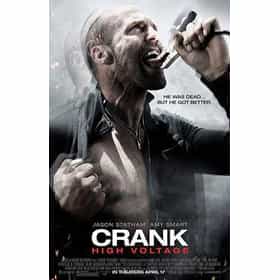 Crank: High Voltage is a 2009 American black comedy/action film and the sequel to the 2006 action film, Crank. The film was written and directed by Mark Neveldine and Brian Taylor and stars Jason Statham reprising his role as Chev Chelios. The story of the film resumes shortly after the first film left off, retaining its real-time presentation and adding more special effects. The film was released in the United Kingdom on April 15, 2009, two days prior to its North American release date. ... more on Wikipedia

Crank: High Voltage is ranked on...