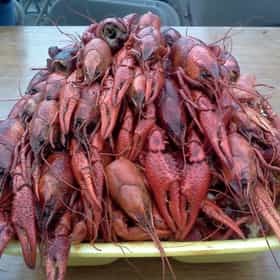 Crayfish, also known as crawfish, crawdads, freshwater lobsters, or mudbugs, are freshwater crustaceans resembling small lobsters, to which they are related; taxonomically, they are members of the superfamilies Astacoidea and Parastacoidea. They breathe through feather-like gills and are found in bodies of water. Some species are found in brooks and streams where there is fresh water running, while others thrive in swamps, ditches, and rice paddies. Most crayfish cannot tolerate polluted water, although some species such as the invasive Procambarus clarkii are hardier. Crayfish feed on living and dead animals and plants. ... more on Wikipedia

Crayfish is ranked on...

#6 of 15 The Best (Non-Fish) Seafood, Ranked 6.8k VOTES Everyone loves seafood, including people who are allergic to shellfish. But what are the best kinds of seafood? This is a li...
#14 of 44 The Best Fish Things That Are Not Really Fish 2.9k VOTES Ranker has fish in the office. They are real fish with real bodies and real lives, real dreams, and real heartbreak. This li...

Crayfish is also found on...