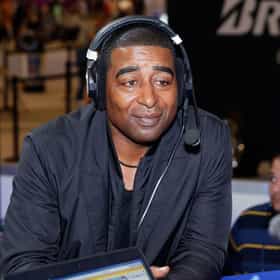 Graduel Christopher Darin Carter (born November 25, 1965) is a former American football player in the National Football League. He was a wide receiver for the Philadelphia Eagles (1987–89), the Minnesota Vikings (1990–2001) and the Miami Dolphins (2002). After starting for the Ohio State University Buckeyes, Carter was drafted by the Eagles in the fourth round of the 1987 NFL supplemental draft. While in Philadelphia, head coach Buddy Ryan helped to coin one of ESPN's Chris Berman's famous quotes about Carter: "All he does is catch touchdowns." He was let go by Ryan in 1989, however, due to off-the-field issues. Carter was signed by the Vikings and turned his life and career ... more on Wikipedia

Cris Carter is ranked on...

Cris Carter is also found on...