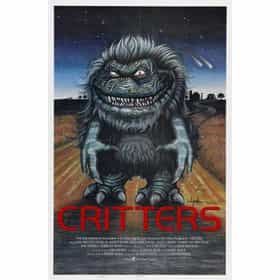 Critters is a 1986 cult comedy horror science fiction film starring Dee Wallace-Stone, M. Emmet Walsh, Billy Green Bush and Scott Grimes. It was the directorial debut of Stephen Herek who co-wrote it alongside Domonic Muir and Don Keith Opper. It is the first film in the Critters series. Although widely believed to have been inspired by the success of Joe Dante's 1984 film Gremlins, Herek has refuted this in interviews, pointing out that the script was written by Muir long before Gremlins went into production and subsequently underwent rewrites to reduce the apparent similarities between the two films. ... more on Wikipedia

Critters is ranked on...

Critters is also found on...