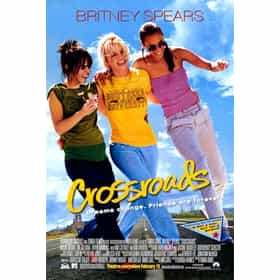 Crossroads is a 2002 American comedy-drama road film set in Georgia. Directed by Tamra Davis and written by Shonda Rhimes, the film stars Britney Spears, Anson Mount, Zoe Saldana, Taryn Manning, Kim Cattrall and Dan Aykroyd. The film was produced by MTV Films and released on February 15, 2002, in North America by Paramount Pictures. The plot centers on three teenage girls as they take a cross-country road trip, finding themselves and their friendship in the process. Development on the film began in 2001, when Spears created a concept that was later expanded by Rhimes. Principal filming began on March 2001, and encompassed over a period of six months. Critics gave negative reviews to ... more on Wikipedia

Crossroads is ranked on...

Crossroads is also found on...