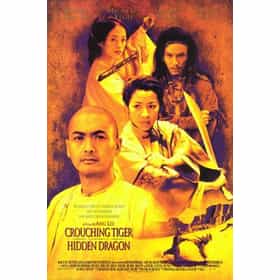 Crouching Tiger, Hidden Dragon is a 2000 wuxia film. An American-Chinese-Hong Kong-Taiwanese co-production, the film was directed by Ang Lee and featured an international cast of Han actors, including Chow Yun-fat, Michelle Yeoh, Zhang Ziyi and Chang Chen. The film was based on the fourth novel in a pentalogy, known in China as the Crane Iron Pentalogy, by wuxia novelist Wang Dulu. The martial arts and action sequences were choreographed by Yuen Wo Ping. A sequel is coming in August 28, 2015. Made on a US$17 million budget, with dialogue in Mandarin, Crouching Tiger, Hidden Dragon became a surprise international success, grossing $213.5 million. It grossed US$128 million in the United ... more on Wikipedia