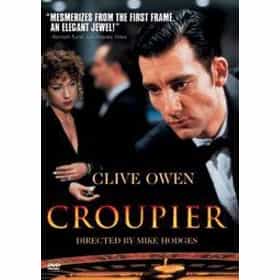 Croupier is a 1998 British film starring Clive Owen as a croupier, and was directed by Mike Hodges. It was the released on DVD by Alliance Atlantis in Canada and Image Entertainment in the USA. The film attracted a strong critical following in North America, and helped to launch Clive Owen's acting career there. Croupier was disqualified from the Academy Awards after it was shown on Dutch television. The film has been classified as neo-noir. It uses interior monologues in the style of many early noir detective films. ... more on Wikipedia

Croupier is ranked on...

Croupier is also found on...