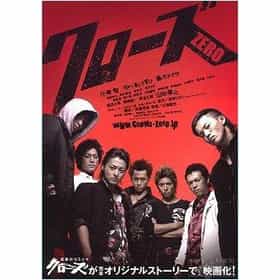 Crows Zero, also known as Crows: Episode 0, is a 2007 Japanese action film based on the manga Crows by Hiroshi Takahashi. The film was directed by Takashi Miike with a screenplay by Shogo Muto, and stars Shun Oguri, Kyōsuke Yabe, Meisa Kuroki, and Takayuki Yamada. The plot serves as a prequel to the manga, and focuses on the power struggle between gangs of students at Suzuran All-Boys High School. The film was released in Japan on October 27, 2007. It has spawned two sequels, Crows Zero 2 and Crows Explode, as well as a manga adaptation released November 13, 2008. ... more on Wikipedia

Crows Zero is ranked on...

Crows Zero is also found on...