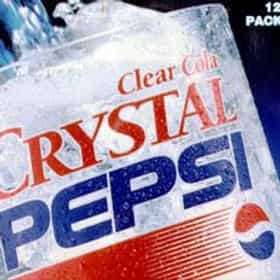 Crystal Pepsi is a soft drink made by PepsiCo. It was first sold in Europe in the early 1990s. The United States and Canada received it from 1992 to 1994, with brief re-releases throughout the mid-2010s. It was briefly sold in the United Kingdom and Australia. The product's original market life was sabotaged by competitor Coca-Cola, in a "kamikaze" plan which sacrificed its Tab Clear product in order to end them both. Crystal Pepsi is notable for a fanatical revival by the public decades later, leading to a corporate response with these re-releases. ... more on Wikipedia

Crystal Pepsi Was The Choice Of A New Generation, But Not For Long 12.9k views What’s better than regular Coke? Clear Coke, of course! Or, at least that’s what a majority of the top soda brands in the US...

Crystal Pepsi is ranked on...

#23 of 49 The Greatest Discontinued '90s Foods And Beverages 995.6k VOTES List of all of the discontinued foods of the '90s that you would give anything to taste just one more time. Grocery stores o...
#8 of 56 The Best Discontinued Soda 70.8k VOTES This list has the absolute best discontinued sodas, ranked by the community. The sodas on this list will take you back in ti...