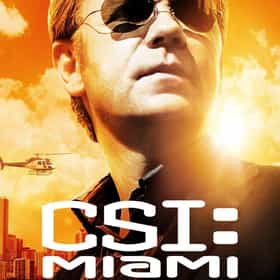 CSI: Miami is an American police procedural television series that ran from September 23, 2002, to April 8, 2012, on CBS. It is the first spin-off of the orignal series. The pilot episode was first broadcast in the United States on May 9, 2002, as a season 2 episode of CSI. The series was produced in partnership with the Canadian media company Alliance Atlantis and CBS Television Studios. CSI: Miami follows CSI's working for the Miami-Dade Police Department as they use physical evidence to solve grisly and often bizarre murders. ... more on Wikipedia

The Best CSI: Miami Episodes 1.6k votes List of the best CSI: Miami episodes, as determined by voters like you. With all the amazing episodes of the show that exist...

CSI: Miami is also found on...