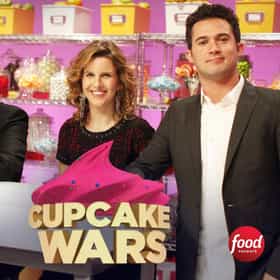 Cupcake Wars is an American reality competition series which premiered on June 13, 2010 and aired on the cable television network Food Network. The cooking show is hosted by Justin Willman and based on creating unique and professional-style cupcakes. The show is similar to successful Chopped cooking show aired on the same network, in that it starts with four contestants who are eliminated one-by-one in three rounds, with the winning team receiving $10,000. Each team consists of a chef and a sous-chef. ... more on Wikipedia

Cupcake Wars is ranked on...

#24 of 42 Reality Shows That Involve Actual Skill 10.4k VOTES Ever come across one of those reality shows that you found strangely addicting, whether or not you’re tend to love or hate r...
#58 of 253 The Best Reality TV Shows Ever 167.1k VOTES This is a list of the best reality TV shows on television, the most (often shamefully) addictive reality TV series. From g...
#37 of 130 The Best Reality Competition Series 73.7k VOTES The best reality TV competition series, ranked by fans and critics. Reality shows are among the most-watched programs on TV,...
#11 of 42 People who voted for Cupcake Wars... also upvote Star Trek Franchise on The Greatest Sci-Fi Movies of All Time also upvote Superman Franchise on The Best Superhero Movies Ever Made The Most Watchable Cooking Competition Shows 22.9k VOTES The best cooking competition shows, hosted by some of television's most entertaining celebrity chefs, have become one of the...
#3 of 30 What to Watch If You Love 'MasterChef' 116 VOTES MasterChef kept viewers on the edge of their seats as home chefs compete for a $250,000 prize, so it's no surprise that you’...
#9 of 30 What to Watch If You Love 'Hell's Kitchen' 44 VOTES Hell's Kitchen kept viewers on the edge of their seats with career-making competitions for aspiring chefs, so it's no surpri...
#7 of 34 What to Watch If You Love 'Chopped' 0 VOTES Every episode of Chopped kept viewers on the edge of their seats with one of the most intense cooking competitions ever...
#17 of 34 The Best Current Food Network Shows 2.4k VOTES Wondering what to watch on the Food Network? This list of the best Food Network shows on now in 2019 has you covered. Food N...
#48 of 99 The Best Cooking TV Shows of All Time 14.5k VOTES Here are the very best cooking shows on television, ranked from best to worst. Including shows from the Food Channel, B...
#25 of 138 The Best Food Network TV Shows 11.9k VOTES List of popular Food Network shows, ranked from best to worst. This list of the top current and cancelled Food Network TV se...
#5 of 17 The Best Baking Competition Shows Ever Made 481 VOTES It’s almost impossible to turn on a television these days and not find a reality television program of some sort, especially...
#35 of 49 The Most Exciting Reality Competition Shows Ever Made 300 VOTES The best reality competition TV shows ever aired are some of the most exciting and competitive series to watch on telev...