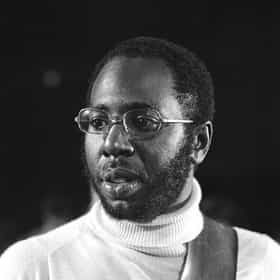 Curtis Lee Mayfield (June 3, 1942 – December 26, 1999) was an American singer-songwriter, guitarist, and record producer, and one of the most influential musicians behind soul and politically conscious African-American music. He first achieved success and recognition with The Impressions during the civil rights movement of the late 1950s and 1960s, and later worked as a solo artist. Born in Chicago, Illinois, Mayfield started his musical career in a gospel choir. Moving to the North Side, he met Jerry Butler in 1956 at the age of 14, and joined the vocal group The Impressions. As a songwriter, Mayfield became noted as one of the first musicians to bring more prevalent themes of social ... more on Wikipedia

Curtis Mayfield is ranked on...

#325 of 1,042 The Best Singers of All Time 2.3M VOTES Who are the best singers of all time? That's a tough question to ask. This list includes many of the greatest, most famous v...
#437 of 453 The Greatest Singers of the Past 30 Years 227.2k VOTES One of the most debated topics in music is who are the greatest singers of the past 30 years. Whether you're a huge Whitney ...
#142 of 844 People who voted for Curtis Mayfield... also upvote The Terminator Franchise on The Greatest Sci-Fi Movies of All Time These Poetic Geniuses Wrote Your Favorite Songs of All Time 361.2k VOTES If you ask anyone who has ever tried, it's tough to write one song, nevertheless a batch to be considered a songwriter. Add ...
#167 of 277 Rank the Rock N Roll Hall of Fame Inductees 310.5k VOTES Update: Follow Ranker's official New Rock 2020 playlist on Spotify! A complete list of bands and artists inducte...
#132 of 183 The Best Solo Artists Who Used to Front a Band 61.2k VOTES Music groups, no matter how successful they may become, tend to have an expiration date. When a rock band or rap group event...
#15 of 277 The Greatest R&B Artists and Bands of All Time 26.7k VOTES A list of the best R&B artists. Though the definition of the genre has skewed over the years, at the heart of R&B mu...
#11 of 124 The Best Funk Bands/Artists 18.7k VOTES This funk bands list ranks the best funk artists and musicians by votes. This list of top funk groups let’s you see who fu...
#14 of 159 People who voted for Curtis Mayfield... also upvote James Bond Franchise on Every James Bond Movie, Ranked Best to Worst also upvote Star Wars Franchise on The Best Movies of All Time The Best Soul Singers/Groups of All Time 36.2k VOTES Combining elements of jazz, R&B, and traditional gospel music, soul is a genre that became popular in the 1950s and hasn...
Rolling Stone Magazine's 100 Greatest Vocalists of All Time 401.9k VIEWS Rolling Stone's list of the 100 best singers of all-time includes some of the greatest vocalists in the history of recording...
17 Famous Quadriplegics 59.7k VIEWS List of Famous People with Quadriplegia, loosely ranked by fame and popularity. Quadriplegia is paralysis that involves the ...
#4 of 34 The Best Psychedelic Soul Bands/Artists 393 VOTES Psychedelic soul artists list, with photos, ranked best to worst by votes. List of good psychedelic soul bands includes a fi...
Famous Rhythm Guitarists 15.9k VIEWS A List of Famous Rhythm Guitarists with photos! These are musicians who are masters of their craft. While it is often the si...

Curtis Mayfield is also found on...