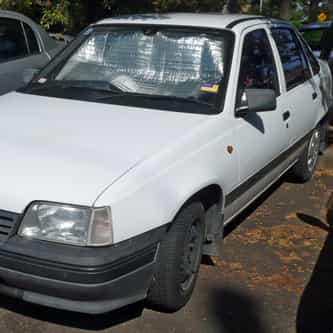 The Daewoo LeMans is a compact car, first manufactured by Daewoo Motors in South Korea between 1986 and 1994, and between as 1994 and 1997 as Daewoo Cielo — a car mechanically identical to the LeMans, differentiated only by its modified styling cues. Like all Daewoos preceding it, the LeMans took its underpinnings from a European Opel design. In the case of the LeMans, the GM T platform-based Opel Kadett E was the donor vehicle, essentially just badge engineered into the form of the ... more on Wikipedia