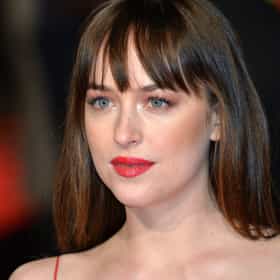 Dakota Mayi Johnson (born October 4, 1989) is an American actress and model. The daughter of actors Don Johnson and Melanie Griffith, she made her film debut at age 10 with a minor appearance in Crazy in Alabama (1999), a dark comedy film starring her mother. Johnson was discouraged from further pursuing acting until she completed high school, after which she began auditioning for roles in Los Angeles. She was cast in a minor part in The Social Network (2010), and subsequently had supporting roles in the comedy 21 Jump Street, the independent comedy Goats, and the romantic comedy The Five-Year Engagement (all 2012). In 2015, Johnson had her first starring role as Anastasia Steele in ... more on Wikipedia

Dakota Johnson is ranked on...

Dakota Johnson is also found on...