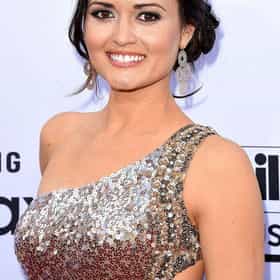 Danica Mae McKellar (born January 3, 1975) is an American actress, mathematics writer, and education advocate. She played Winnie Cooper in the television series The Wonder Years. From 2010–2013 and since 2019, McKellar voiced Miss Martian in the animated superhero series Young Justice. In 2015, McKellar was cast in the Netflix original series Project Mc2. She also appears in several television films for Hallmark Channel. She is also the current voice of Judy Jetson from The Jetsons since 2017 following Janet Waldo's death in 2016. In addition to her acting work, McKellar later wrote six non-fiction books, all dealing with mathematics (as she has a bachelor's degree in mathematics from ... more on Wikipedia

Danica McKellar is ranked on...

#55 of 226 People who voted for Danica McKellar... People on the West Coast are 2x more likely to vote for this also upvote Star Trek Franchise on The Greatest Sci-Fi Movies of All Time The Greatest Former Child Stars 419k VOTES List of Hollywood kids: actors who grew up on the big screen and child stars you recognize working today. While there are ma...
#139 of 163 The Best Hallmark Channel Actresses 190.5k VOTES They're the stars, the moms, the sisters, and the best friends. These Hallmark Channel actresses bring Hallmark Channel Orig...
#917 of 1,582 The Most Beautiful Women in the World 5.6M VOTES Naming the most beautiful women in the world is a difficult task because of how subjective it is. Beauty is a mixture of phy...
#116 of 162 Hottest Female Celebrities in Their 40s in 2015 90.3k VOTES Time is tough on all of us, but it’s especially tough on women who make their living - at least partially - on their appeara...
#20 of 257 Celebrities Who Should Run for President 604.4k VOTES Which celebrity would you actually vote for if they ran for President of the United States? If you can remember all the way ...
#231 of 3,140 The Most Beautiful Celebrities Of Our Time 6.3M VOTES This list of hot celebrities is ranked by pop culture junkies worldwide, making it the best place to find the most attractiv...
#495 of 514 People who voted for Danica McKellar... People Age 30 to 49 are 2x more likely to vote for this Celebrities Nobody Cares About Anymore 3.4M VOTES Some of the greatest actors of all time have, in recent days, turned into a bunch of washed-up hacks that would be somehow b...
#5 of 12 12 Times Puberty Was Really Good To Nerdy Child Actors 2.9k VOTES Puberty is a rough time for everyone. Thankfully, most people emerge on the other side pretty much unscathed and more or les...
#68 of 127 The Greatest '90s Teen Stars 315.2k VOTES The greatest teen stars of the '90s are well-remembered on this countdown. They were everywhere – they ruled the box office,...
#7 of 13 Child Actors You Didn’t Realize Are Still Acting As Adults 10.5k VOTES We're so used to hearing horror stories about child actors who make a turbulent transition to adulthood that we often don't ...
#23 of 45 '90s Celebrities You Should Be Following on Instagram 3.2k VOTES You knew them, you loved them, and back in the day, many of them were your first crushes. But great news! These icons from...
#173 of 415 Maxim's Nominees for the 2015 Hot 100 191.4k VOTES Here are Maxim's nominees for the 2015 hot 100. This is the issue of Maxim that gentlemen around the world look forward to m...
#32 of 61 Celebrities You Want On Your Trivia Team 8.9k VOTES It’s easy to assume celebrities are not very intelligent and that they are just beautiful people reciting lines for our ente...
The Smartest Celebrities 805.1k VIEWS The smartest celebrities are those who have documented high IQs, multiple degrees from distinguished universities, and a h...
Hallmark Channel Actors and Actresses 144.2k VIEWS The Hallmark Channel may have a primary group of talent they work with but they also employ a wide range of actors you will ...
Lifetime Movies Actors and Actresses 14.7k VIEWS Lifetime Movies employs a wide range of actors -most of which you will recognize from more than just TV movies. Lifetime act...
Child Actors Who Went On To Have Successful Non-Acting Careers 21.8k VIEWS When you think of child actors, odds are your thoughts wander to those unfortunate folks whose lives got complicated as they...
Your Childhood Crushes (Then And Now) 97.1M VIEWS You remember the days: sitting in front of the TV wondering which outfit Kelly Kapowski would wear today in her efforts to d...
Celebrities Who Are Secret Geeks 56k VIEWS List of Celebrities Who Are Secret Geeks ranked by fame and popularity. It has never been cooler to be a geek and some of Ho...
Teen Actors Whose First Kisses Were for Filming 45.4k VIEWS Even for non-celebrities, most first kisses are totally awkward. Now imagine being an actor whose first kiss was while filmi...
Teen Stars Who Still Finished College 11.7k VIEWS This list rounds up information on teen celebrities who still finished college even after becoming stars. Several young cele...
26 Famous ISTJs 119.8k VIEWS Did you know that many of the most popular celebrities, politicians, and entrepreneurs are ISTJs? ISTJ stands for Introverte...
14 Forgotten Stars Who Are Making It Rain On The Hallmark Channel 323.4k VIEWS Whatever happened to '90s stars Dean Cain, Tori Spelling, and Lacey Chabert? All three actors are still actively workin...
What Happened To The Cast Of The Wonder Years? 1.9k VIEWS What happened to the cast of The Wonder Years? While none of the main cast have gone on to become A-List Hollywood acto...

Danica McKellar is also found on...