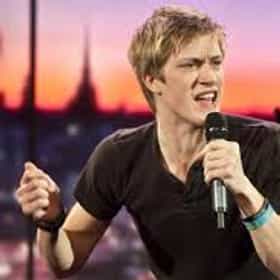 Daniel Sloss (born 11 September 1990) is a Scottish comedian, actor and writer, notable for having become established as a professional live and television performer whilst still in his teens.He was the youngest comedian to perform a solo season in London's West End, at the age of 19; he tours widely internationally; signed a DVD deal with BBC Worldwide's 2Entertain label at aged 20; and has appeared on networked US television programmes including multiple appearances on Conan and The Late Late Show with Craig Ferguson. On 11 September, 2018 Netflix released two hour-long comedy specials under the title “Daniel Sloss – Live Shows”, with "DARK" and "Jigsaw". ... more on Wikipedia

Daniel Sloss is also found on...