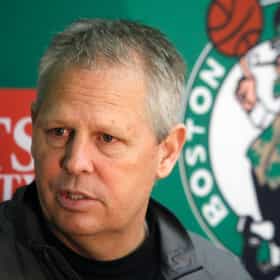 Daniel Ray Ainge (born March 17, 1959) is an American basketball executive and former professional basketball and baseball player. Ainge is currently the general manager and President of Basketball Operations for the Boston Celtics of the National Basketball Association (NBA). Ainge was an outstanding high school athlete. At Brigham Young University, he was named national basketball college player of the year and won the John R. Wooden Award for the most outstanding male college basketball player. While in college, Ainge also played parts of three seasons with the Toronto Blue Jays of Major League Baseball (MLB), mostly as a second baseman. He was then drafted into the NBA by the ... more on Wikipedia

Danny Ainge is ranked on...

Danny Ainge is also found on...