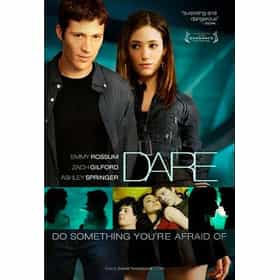 Dare is a 2009 indie romantic drama film directed by Adam Salky. It is written by David Brind. The movie is based on Salky's 2005 short film which was met with acclaim at film festivals. The feature length version, which premiered at the Sundance Film Festival, stars Emmy Rossum in a story about how "three very different teenagers discover that, even in the safe world of a suburban prep school, no one is who she or he appears to be." IMDB also provides a different teaser synopsis: "The good girl, the outsider and the bad boy…like you’ve never seen them before." Described as a cross between Pretty in Pink and Cruel Intentions. ... more on Wikipedia

Dare is ranked on...

Dare is also found on...