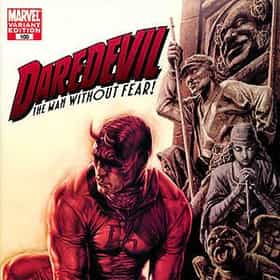 Daredevil is a fictional superhero appearing in American comic books published by Marvel Comics. Daredevil was created by writer-editor Stan Lee and artist Bill Everett, with an unspecified amount of input from Jack Kirby. The character first appeared in Daredevil #1 (April 1964). Writer/artist Frank Miller's influential tenure on the title in the early 1980s cemented the character as a popular and influential part of the Marvel Universe. Daredevil is commonly known by such epithets as the "Man Without Fear" and the "Devil of Hell's Kitchen". ... more on Wikipedia

Daredevil is ranked on...

Daredevil is also found on...