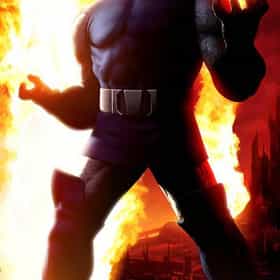 Darkseid is a fictional supervillain appearing in American comic books published by DC Comics. He first appeared in Superman's Pal Jimmy Olsen #134, and he was created by writer-artist Jack Kirby. Darkseid is one of the most powerful characters in the DC Universe. Debuting in the Silver Age of Comic Books, he has appeared in four decades of DC Comics publications, featuring prominently in the New Gods titles and limited series as the nemesis of the New Gods and Superman. He has also been associated with the DC Comics related media and merchandise such as animated television series, toys, trading cards, and video games. Darkseid was ranked at No #6 on IGN's Top 100 Comic Book Villains ... more on Wikipedia

How Darkseid Was Defeated By His Daughter, Turned Into A Baby, And Came Back Stronger Than Ever 1.4k views If you didn't grow up reading DC comic books or watching animated series like Super Friends or Justice League Unlimited, you...

Darkseid is ranked on...

#2 of 176 The Greatest Villains in DC Comics, Ranked 88.9k VOTES Here are the best DC villains ranked best to worst by comic book fans. These popular bad guys in DC Comics are the best...
#8 of 102 Comic Book Characters We Want to See on Film 133.1k VOTES   Certain comic book characters definitely lend themselves to film better than others. Sometimes it's their costume...
#3 of 55 The Best Superman Villains Ever 26.3k VOTES List of the most notorious villains from Superman's rogues gallery, as ranked by the fans. Superman has as wide array of adv...
#20 of 25 The Fastest Characters In Comics 33.3k VOTES Feeling a need? A need for speed? That's what the fastest characters in comics are feeling. Whether they figh...
#26 of 50 The Fictional Leaders You'd Most Like to Behead 11.5k VOTES A list of fictional leaders who you’d most like to behead. Do you know of some fictional kings, queens, princes, or politici...
#6 of 162 The Most Powerful Comic Book Characters Ever, Ranked 132.2k VOTES The problem with ranking the most powerful characters in the history of comic books is that writers always want to top the t...
#3 of 20 People who voted for Darkseid... also upvote Superman on The 100+ Best DC Comics Heroes of All Time According to Fans also upvote Flash on The Best Comic Book Superheroes of All Time The Best Archenemies in DC Comics 8.7k VOTES Archenemy, arch-rival, arch-nemesis whatever you want to call it, it's personal. The yin to the yang, the polar opposite, th...
All Superman Villains & Enemies Listed 265.7k VIEWS This is a collection of all Superman's supervillains that have appeared in comic books or movies as Superman enemies. Use ...
All The Characters Who Wore The Infinity Gauntlet Besides Thanos 697.4k VIEWS Although most frequently associated with Thanos the Mad Titan, the villain of Avengers: Infinity War, there are a numbe...