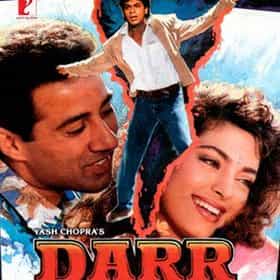 Darr: A Violent Love Story is a 1993 Indian psychological thriller film directed by Yash Chopra under the banner of Yash Raj Films. It stars Sunny Deol, Juhi Chawla and Shahrukh Khan in the lead roles. It is the second film in which Shahrukh Khan played the role of a villain. It is considered to be one of his best performances and earned him a Filmfare Award nomination for Best Villain. In 1993, Shahrukh Khan won acclaim for his performances in villainous roles as an obsessive lover, respectively, in the box office hits, Darr and Baazigar. In Khan's entry in Encyclopædia Britannica's "Encyclopedia of Hindi Cinema" it was stated that "he defied the image of the ... more on Wikipedia

Darr is ranked on...

Darr is also found on...