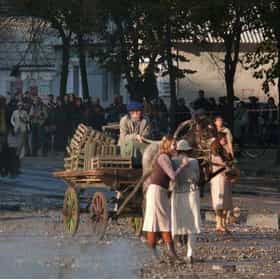 Dau is a Russian film directed by Ilya Khrzhanovsky. The film deals with the life of the Nobel Prize winning Soviet scientist Lev Landau. The movie is one of Russia's largest and most controversial cinematic projects. The preparation for the shooting for the film began in 2006, whereas the actual shooting started in 2008 and went on for three years. The world premiere of the movie was intended to take place at the 2012 Cannes Film Festival but was rescheduled to L’Atelier du Festival at Cannes in May 2014. As of 2015 it is still in post-production. The film was shot at various sites in Russia, Ukraine, Germany, United Kingdom and Denmark. Most of the film was shot on a specially ... more on Wikipedia

The Darkest Film Shoots in History 97.2k VIEWS We imagine movie sets to be controlled environments characterized by careful planning, safety precautions, and an air of&nbs...
#14 of 30 The Best Russian Movies Of 2019 98 VOTES Here is your chance to vote for the best Russian movies of 2019. The country has seen its film production grow in recent yea...