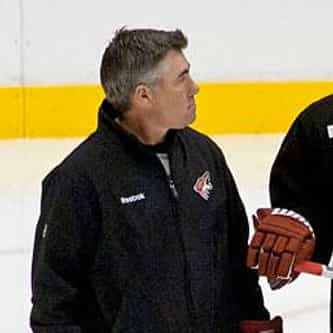 David G. Tippett (born August 25, 1961) is a Canadian professional ice hockey coach and former player. He is the current head coach of the Edmonton Oilers of the National Hockey League (NHL). Tippett is also a former left winger who played in the NHL from 1983 to 1994 for the Hartford Whalers, Pittsburgh Penguins, Philadelphia Flyers and Washington Capitals. He has formerly served as head coach of the Dallas Stars from May 21, 2002 until June 10, 2009, and for the Phoenix/Arizona Coyotes ... more on Wikipedia

Dave Tippett IS LISTED ON