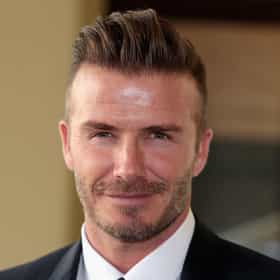 David Robert Joseph Beckham (UK: ; born 2 May 1975) is an English former professional footballer, the current president of Inter Miami CF and co-owner of Salford City. He played for Manchester United, Preston North End, Real Madrid, Milan, LA Galaxy, Paris Saint-Germain and the England national team, for which he held the appearance record for an outfield player until 2016. He is the first English player to win league titles in four countries: England, Spain, the United States and France. He retired in May 2013 after a 20-year career, during which he won 19 major trophies.Beckham's professional club career began with Manchester United, where he made his first-team debut in 1992 at age ... more on Wikipedia

David Beckham is ranked on...

David Beckham is also found on...