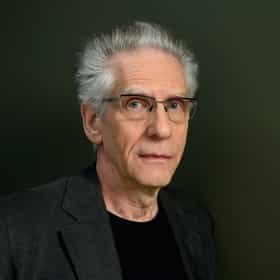 David Paul Cronenberg (born March 15, 1943) is a Canadian filmmaker, writer, and actor. He is one of the principal originators of what is commonly known as the body horror genre, with his films exploring visceral bodily transformation, infection, technology, and the intertwining of the psychological with the physical. In the first third of his career, he explored these themes mostly through horror and science fiction films such as Scanners (1981) and Videodrome (1983), although his work has since expanded beyond these genres. Cronenberg's films have polarized critics and audiences alike; he has earned critical acclaim and has sparked controversy for his depictions of gore and violence. ... more on Wikipedia

David Cronenberg is ranked on...

#179 of 313 Famous People Most Likely to Live to 100 13.5k VOTES Sometimes, age really is just a number. But these healthy old celebrities seem to be defying time like no others. These clas...
#97 of 139 The Greatest Auteurs in Film History 13k VOTES An auteur is a filmmaker or director whose personal, individual production style and creative flare gives his or her films a...
#10 of 54 People who voted for David Cronenberg... People outside of the US are 2x more likely to vote for this also upvote Alien Franchise on The Greatest Horror Films of All Time The Best Horror Directors in Film History 15.1k VOTES This list of the best horror directors in film history has ranked by the community as the absolute best in the genre. This l...
#13 of 46 The Greatest Directors of the 1980s 2.4k VOTES List of the top directors of the 80s. From 1980 to 1989, film history was shaped by esteemed directors who defined the decad...
Famous People Named David or Dave 52.4k VIEWS List of famous people named David, along with photos. How many celebrities named David can you think of? The famous Davids b...

David Cronenberg is also found on...