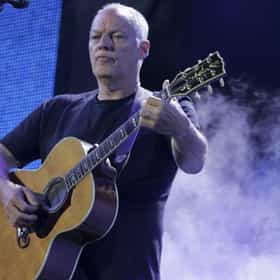 David Jon Gilmour ( GHIL-mor; born 6 March 1946) is an English multi-instrumentalist, singer and songwriter who was a member of the progressive rock band Pink Floyd. He joined the group as guitarist and co-lead vocalist in 1968 shortly before the departure of founding member Syd Barrett. Pink Floyd subsequently achieved international success with the concept albums The Dark Side of the Moon, Wish You Were Here, Animals, and The Wall. By the early 1980s, they had become one of the best-selling and most acclaimed acts in music history; by 2012, the band had sold more than 250 million records worldwide, including 75 million units sold in the United States. Following the departure of Roger ... more on Wikipedia

David Gilmour is ranked on...

#198 of 283 Musicians Who Belong in the Rock and Roll Hall of Fame 418.8k VOTES Update: the Rock and Roll Hall of Fame has listened to your feedback and inducted a number of artists on this list sinc...
#173 of 2,219 People who voted for David Gilmour... People over 50 are 2x more likely to vote for this The Best Rock Bands of All Time 3.2M VOTES There are thousands of rock bands that have existed throughout the decades ever since the dawn of rock and roll, but only th...
#82 of 298 The (Male) Singer You Most Wish You Could Sound Like 132.9k VOTES What male singer's voice would you most like to have? This is a different question than "who are the best vocalists eve...
#6 of 655 The Greatest Guitarists Of All Time 626.9k VOTES The best guitarists of all time, voted on and ranked by tens of thousands of music fans, with photos and other info. Wi...
#620 of 1,472 The Greatest Minds of All Time 737.5k VOTES List of the Greatest Minds of All Time, throughout history. This list represents the most influential thinkers across variou...
#76 of 137 The Best Solo Artists Who Used to Front a Band 60k VOTES Music groups, no matter how successful they may become, tend to have an expiration date. When a rock band or rap group event...
#162 of 279 The Top Pop Artists of the 1960s 91k VOTES List of the best pop artists of the 60s, ranked. The 1960s may very well be the best decade for music in the rock era. Music...
#583 of 854 These Poetic Geniuses Wrote Your Favorite Songs of All Time 357.6k VOTES If you ask anyone who has ever tried, it's tough to write one song, nevertheless a batch to be considered a songwriter. Add ...
#60 of 70 The Greatest Mandolinists of All Time 6.1k VOTES Who are the best musicians to have ever played the mandolin? The mandolin is originally a stringed instrument from Italy. It...
#8 of 107 Which Bands Or Musicians Do You Most Want To See Before They (Or You) Kick The Bucket? 35.7k VOTES There's a certain energy associated with a live performance that just can't be replicated or synthesized by a single album. ...
#4 of 84 The Greatest Rock Guitarists of the 1970s 19.8k VOTES Alright, rock music lovers: Your time has come. This is a list of '70s guitarists - the greatest rock guitar players of the ...
#20 of 323 The Best Progressive Rock Bands/Artists 151.7k VOTES Loved by many and hated by some, progressive rock - or prog rock - is one of the most popular subgenres of rock music. Meldi...
#233 of 411 The Best British Rock Bands/Artists 279.3k VOTES Of all the important rock bands to grace the stage, British bands are considered by many to be the most important and most i...
Ages of Rock Stars 28.5k VIEWS Do you know the ages of rock stars you listen to? Well, here you have them: the ages of top rock stars listed by fame and no...
Every Band & Musician Who Has Performed on Saturday Night Live 104.7k VIEWS Live from the main stage at 30 Rockefeller Plaza, this is a list of every band, musician, and singer who has performed on Sa...
Famous Lead Guitarists 29.8k VIEWS A List of Famous Lead Guitarists with photos! These are musicians who are masters of their craft. While it is often the sing...

David Gilmour is also found on...