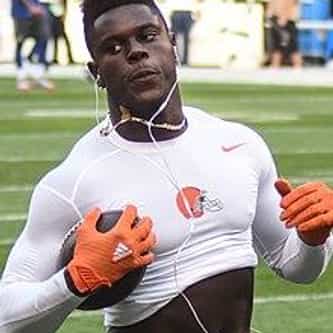 David Njoku (born July 10, 1996) is an American football tight end for the Cleveland Browns of the National Football League (NFL). He played college football at Miami, and was drafted by the Browns in the first round of the 2017 NFL Draft. Njoku is one of nine children born to Nigerian parents who immigrated to the United States. He attended Cedar Grove High School in Cedar Grove, New Jersey. During his career, he had 76 receptions for 1,794 yards and 19 touchdowns. He committed to the ... more on Wikipedia

David Njoku IS LISTED ON