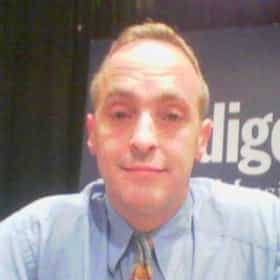 David Raymond Sedaris (; born December 26, 1956) is an American humorist, comedian, author, and radio contributor. He was publicly recognized in 1992 when National Public Radio broadcast his essay "Santaland Diaries". He published his first collection of essays and short stories, Barrel Fever, in 1994. He is the brother and writing collaborator of actor Amy Sedaris. Much of Sedaris's humor is ostensibly autobiographical and self-deprecating and often concerns his family life, his middle-class upbringing in the suburbs of Raleigh, North Carolina, his Greek heritage, homosexuality, jobs, education, drug use, and obsessive behaviors, and his life in France, London, and the ... more on Wikipedia

David Sedaris is ranked on...

#156 of 385 The Greatest American Writers of All Time 64.2k VOTES Who are the greatest American authors of all time? In just two short centuries, the great U.S. of A. has produced an incredi...
#40 of 78 History's Greatest Essayists 4.7k VOTES Some of the most famous literary works are essays, written by great authors and writers. Essays span a variety of genres, in...
#6 of 26 The Best Authors Who Narrate Their Own Audiobooks 126 VOTES In this fast-paced world we live in, it seems not everyone has time to actually sit down and read a book. Though audiobooks ...
#8 of 23 The Funniest Gay Comedians of All Time 1.9k VOTES This list contains information about the best gay comedians, loosely ranked by user votes. The best gay male comedians com...
Famous People Who Had Kidney Stones 4.3k VIEWS While rarely serious, kidney stones can be incredibly painful, and famous people with kidney stones can attest to that. Kidn...
All The Celebrities Who Call Chicago Home 446k VIEWS Several famous actors, musicians, and comedians have lived in Chicago, Illinois. Many celebrities were born in Chicago and o...

David Sedaris is also found on...