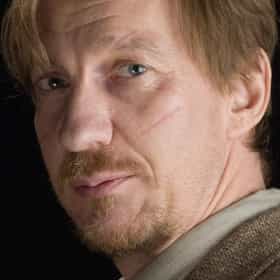 David Wheeler (born 20 March 1963), known as David Thewlis, is an English actor, director, screenwriter, and author. He first rose to prominence for playing Johnny Fletcher in the film Naked (1993), for which he won the Cannes Film Festival Award for Best Actor. His most commercially successful roles to date have been of Remus Lupin in the Harry Potter film series and Sir Patrick Morgan/Ares in Wonder Woman (2017). Other notable film appearances include Dragonheart (1996), Seven Years in Tibet (1997), Kingdom of Heaven (2005), The Boy in the Striped Pyjamas (2008), War Horse (2011), The Theory of Everything (2014) and Anomalisa (2015). Thewlis has combined major motion picture work ... more on Wikipedia

David Thewlis is ranked on...

#410 of 1,145 The Best Actors in Film History 2.2M VOTES The best actors ever are ranked here in this list of the best actors in film history. These are the greatest actors ever to ...
#28 of 66 The Best Living English Actors 29.3k VOTES You'd listen to Michael Caine talk all day, right? And surely you'd watch Ian McKellan in just about any movie Hollywood d...
The Cast of Harry Potter: Where Are They Now? 5M VIEWS When J.K. Rowling’s wildly-popular and bestselling Harry Potter book series was adapted for the screen, fans finally got to ...
19 Actors Who Were Incredibly Close To Playing Harry Potter Characters 45.9k VIEWS Believe it or not, there actually were some British people who weren't in Harry Potter. Behind-the-scenes stories are shared...
35 Times You've Seen the Actors from Fargo Before 16.2k VIEWS From unknowns to seasoned pros, the Fargo TV series actors come from all parts. Newbie Allison Tolman came out of ...

David Thewlis is also found on...