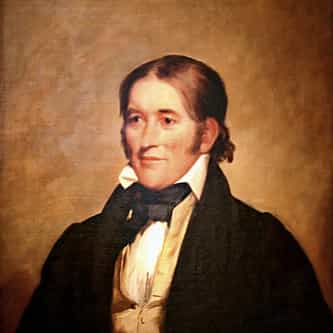 David Crockett (August 17, 1786 – March 6, 1836) was an American folk hero, frontiersman, soldier, and politician. He is commonly referred to in popular culture by the epithet "King of the Wild Frontier". He represented Tennessee in the U.S. House of Representatives and served in the Texas Revolution. Crockett grew up in East Tennessee, where he gained a reputation for hunting and storytelling. He was made a colonel in the militia of Lawrence County, Tennessee and was elected to ... more on Wikipedia

Davy Crockett IS LISTED ON

#363 of 753
2.2M VOTES People We Wish Were Still Alive
#175 of 438
1.2M VOTES Famous Men You'd Want to Have a Beer With
#35 of 433
248.3k VOTES The Most Important Leaders in U.S. History
#71 of 170
82.1k VOTES If You Fought To The Death, Who Would You Want By Your Side?
126.7k VIEWS Firsthand Descriptions Of What 14 Historical Figures Really Looked Like
1.1M VIEWS Famous Freemasons List
Famous People From Tennessee Famous Leo Celebrities List of Famous Soldiers Men On Stamps: List Of Men On US Postage People On Stamps: List Of People On US Postage List of Famous Tennessee Politicians Famous People Who Died in Texas