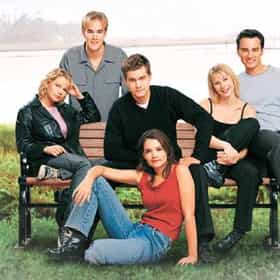 Dawson's Creek is an American teen drama television series about the fictional lives of a close-knit group of friends beginning in high school and continuing in college. The series stars James Van Der Beek as Dawson Leery, Katie Holmes as his best friend and love interest Joey Potter, and Joshua Jackson as their fellow best friend Pacey Witter. Michelle Williams plays Jen Lindley, who moves from New York to Capeside. The show was created by Kevin Williamson and debuted on The WB on January 20, 1998 and was produced by Columbia TriStar Television. The series was filmed in Wilmington, North Carolina. Part of a new craze for teen-themed movies and television shows in America in the late ... more on Wikipedia

Dawson's Creek is ranked on...

Dawson's Creek is also found on...