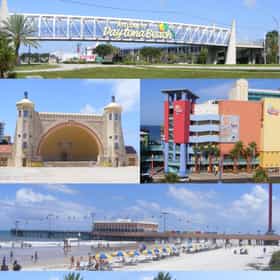 Daytona Beach is a city in Volusia County, Florida, United States. The city lies about 51 miles northeast of Orlando, 86 miles southeast of Jacksonville, and 242 miles northwest of Miami. In the 2010 U.S. Census, it had a population of 61,005. It is a principal city of the Deltona–Daytona Beach–Ormond Beach, FL metropolitan statistical area, which was home to 590,289 people in 2010. Daytona Beach is also a principal city of the Fun Coast region of Florida. The city is historically known for its beach where the hard-packed sand allows motorized vehicles to drive on the beach in restricted areas. This hard-packed sand made Daytona Beach a mecca for motorsports, and the old Daytona Beach ... more on Wikipedia

Daytona Beach is ranked on...

#113 of 289 People who voted for Daytona Beach... also upvote Harry Potter Franchise on The Best Teen Movies of All Time are 11x more likely to vote for Orlando on this list The Best U.S. Cities for Vacations 33.7k VOTES Vacationing in cities may not be as restful as spending a week or two out by the lake, and it may not always be the best opt...
#70 of 75 US Cities That Should Have an NFL Team 91.7k VOTES Of course big cities like New York and Miami have NFL teams, but there are plenty of other cities that should have a footb...
#15 of 43 The Best Spring Break Destinations 3.1k VOTES This is a list of the best spring break destinations for college kids ranked as most awesome and wild. When warm weather hit...
#123 of 372 The Coolest Cities in America 126.7k VOTES This super cool list of the coolest cities in the U.S. has been ranked by the many chill, awesome people who have visited or...
#20 of 28 The Best Beaches in the US 3.7k VOTES What are the best beaches in the U.S.? This list includes many of the greatest beaches and beach towns in the United States....
#16 of 40 The Best Cities for Allergies 1k VOTES List of the top cities for people with allergies. It comes around every Spring, that plague known as allergy season. You may...
#33 of 45 The Best Beaches in the South 4.8k VOTES What are the best beaches in the South? Southern beaches are among the most gorgeous beaches in the U.S. Whether it's the fi...
#25 of 41 The Best Beaches in Florida 4.9k VOTES List of the best beaches in Florida, ranked. This list includes the top sea, sand, and sun combinations in the Sunshine Stat...
#5 of 27 The Trashiest Spring Break Destinations 1k VOTES Spring break is here bruh, we hope you've been hitting the tanning bed and getting your weight lift on, 'cause you don't wan...
#86 of 123 The Best Places to Go Hang Gliding 1.2k VOTES This is a ranked list of the best places for hang gliding as voted on by men and women. These places include some of the mos...
#24 of 38 The Best Beach Destinations for a Family Vacation 315 VOTES List of top beach destinations for a family trip. Looking for the perfect beach vacation for your family? This list ranks th...