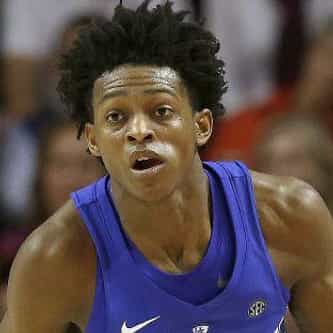 De'Aaron Fox (born December 20, 1997) is an American professional basketball player for the Sacramento Kings of the National Basketball Association (NBA). Fox played one season of college basketball for the Kentucky Wildcats. On November 1, 2018, during a 146-115 win over the Atlanta Hawks, Fox notched his first career triple-double with 31 points, 10 rebounds, and 15 assists to bring the Kings to a 6-3 record, becoming the only player after LeBron James in 2005 to score a 30-point triple ... more on Wikipedia

De'Aaron Fox IS LISTED ON