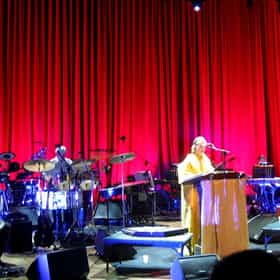 Dead Can Dance is an English-Australian musical project that formed in 1981 in Melbourne by Lisa Gerrard and Brendan Perry. The band relocated to London, England, in May 1982. Australian music historian Ian McFarlane described Dead Can Dance's style as "constructed soundscapes of mesmerising grandeur and solemn beauty; African polyrhythms, Gaelic folk, Gregorian chant, Middle Eastern mantras and art rock." Having disbanded in 1998, they reunited briefly in 2005 for a world tour and reformed in 2011, releasing a new album and embarking on several tours. ... more on Wikipedia

lists about Dead Can Dance

The Best Dead Can Dance Albums of All Time 511 votes Dead Can Dance are one of the greater ambient bands of their time, with a diverse music style covering a range of music genr...

Dead Can Dance is ranked on...

#730 of 2,175 The Greatest Musical Artists of All Time 13.4M VOTES When VH1 polled fellow artists to name the greatest artists of all time, it seemed like a good idea---but in reality, the li...
#433 of 620 The Greatest Live Bands of All Time 333.2k VOTES List of the greatest live bands or artists of all time, created and ranked by music fans worldwide asks the question "w...
#370 of 502 The Greatest Musical Artists of the '80s 574.4k VOTES   The greatest and most prolific artists of music's most colorful decade are remembered on this list. This list is ba...
#3 of 199 The Best Darkwave Bands/Artists 12.9k VOTES With its origins beginning in the 1970s, darkwave took post-punk and New Wave and added dark introspective lyrics that diffe...
#31 of 160 The Best Dream Pop Bands 5.2k VOTES Coined in the 1980s, dream pop rose to prominence in that decade and was generally used to describe shoegaze. However, over ...
#29 of 369 People who voted for Dead Can Dance... are 6x more likely to vote for The Cure on this list are 14x more likely to vote for Cocteau Twins on this list The Best Gothic Rock Bands/Artists 36.4k VOTES Blending elements of post-punk and alternative rock, the best gothic rock bands are some the best known rock bands, albeit s...
#69 of 81 The Best Cowpunk Bands 5.1k VOTES Cowpunk artists list, with photos, ranked best to worst by votes. The best country punk music. List of good cowpunk bands in...
#7 of 342 The Best World Music Artists 2.9k VOTES World music is an easy way for people to describe the melding traditional and nontraditional music from foreign countries. G...
#163 of 310 The Best Australian Bands, Ranked 165.5k VOTES Who are the best Australian bands? The best bands from Australia you'll find on this list come from a variety of different m...
#7 of 110 The Best Ambient Music Bands/Artists 3.9k VOTES Some people may associate ambient music with experimental music, but there's far more to the sound that simply describing it...

Dead Can Dance is also found on...