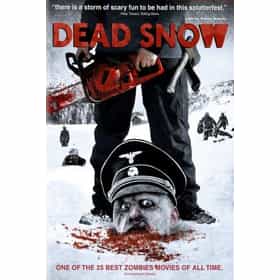 This film is a 2009 Norwegian zombie splatter film directed by Tommy Wirkola, starring Charlotte Frogner, Stig Frode Henriksen, Vegar Hoel, Jeppe Laursen, Evy Kasseth Røsten, Jenny Skavlan, and Lasse Valdal. The film centers on a group of students surviving a Nazi zombie attack in the mountains of Norway. The premise of the film is similar to that of the draugr. NYAV Post has produced an English dub of this film for the home media release. ... more on Wikipedia

Dead Snow is ranked on...

#351 of 771 The Best Horror Movies of All Time 1M VOTES Horror movies, ranked by adrenaline junkies worldwide. Anyone can vote on this CrowdRanked list, and can even add your own f...
#12 of 117 The Best Zombie Comedies 2.1k VOTES This list of the best zombie comedies proves that there's plenty of laughs available even in the most rotting, apocalyptic l...
#115 of 251 The Best Movies of 2009 13.4k VOTES A list of the best movies of 2009, from epic movies like Avatar to blockbusters like Star Trek. The '00s were a decade whe...
#178 of 212 Movies That Turned 10 in 2019 13.2k VOTES Take a trip down memory lane with this list of movies that turned 10 in 2019. Featuring epic war dramas, comic book mov...
#27 of 33 The Scariest Cabin Horror Movies 1.4k VOTES Cabins are creepy enough as it is with their proximity to hungry bears and biting bugs, but add an axe-wielding murderer to ...
#66 of 180 The Best Comedy Horror Movies, Ranked 30.3k VOTES Funny horror movies! This is a list list of some of the best comedy horror movies ever made, or horror comedies. Either way ...
#26 of 62 The Best Horror Movies Set in the Woods 15.4k VOTES Do the woods scare you? Do they bring you an uneasy feeling? Many horror movies have been set in the woods because forests a...
#351 of 501 The Scariest Movies Ever Made 546k VOTES These are the all-time scariest movies ever made. Many of these movies have become part of the pop culture lexicon due to th...
#70 of 117 The Best Satire Movies 4.5k VOTES A list of the best satire movies ever made, ranked by film fans' votes. This list is ordered by popularity, so only the grea...
#45 of 98 People who voted for Dead Snow... People in the South are 4x more likely to vote for this The Funniest Horror Movies Ever Made 50.9k VOTES There’s nothing better than a ridiculous comedy horror movie. Whether it’s for a date night or just a timekiller, the funnie...
#39 of 44 The Best Splatter Movies 882 VOTES Here it is, folks, a list of all the best splatter films of all time, many of which are streaming on Netflix Instant and Ama...
#15 of 23 The Best 2000s Zombie Movies 781 VOTES The last 10 years have been all about zombies, and these 2000s zombie movies are a big reason for that. Starting in the earl...

Dead Snow is also found on...