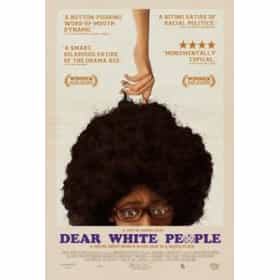 Dear White People is ranked on...

#520 of 721 The Best Black Movies Ever Made, Ranked 671.1k VOTES The best black movies are favorites that explore African-American culture and themes. This list is ranked by film fans, many...
#110 of 160 The Best Movies of 2014 66.1k VOTES Sure there are the Oscars, Golden Globes, and a number of other award ceremonies that hand out trophies to movies that are v...
#43 of 51 The Most Woke Movies of All Time 1.3k VOTES The term woke is relatively new to our vernacular, but socially conscious movies that bring awareness to issues have been ar...
#36 of 50 The Best Black Drama Movies 2.5k VOTES There are several Academy Award winning movies on this impressive list of the greatest black drama films. Heavy-hitting tale...
#4 of 20 The Best Black LGBTQ+ Movies 86 VOTES The best black LGBTQ+ films explore and deconstruct a character’s experience. The cinema provides a spectator the opportunit...