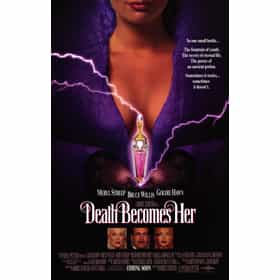 This film is a 1992 American black comedy-fantasy film directed by Robert Zemeckis and scripted by David Koepp and Martin Donovan. Starring Meryl Streep, Bruce Willis, Goldie Hawn and Isabella Rossellini, the film focuses on a childish pair of rivals who drink a magic potion that promises eternal youth. The film won the Academy Award for Visual Effects. Despite mixed reviews, the film was a commercial success, grossing $149 million at the box office. ... more on Wikipedia

lists about Death Becomes Her

Behind-The-Scenes Stories From ‘Death Becomes Her’ 52.1k views Given their prestige in the film industry, it seems improbable that Meryl Streep, Goldie Hawn, and Bruce Willis would all ap...
'Death Becomes Her' Is Way Weirder Than You Remember 121.5k views It seems bizarre that the producers and designers behind Back to the Future, Star Wars, Forrest Gump, and countless other ti...

Death Becomes Her is ranked on...

Death Becomes Her is also found on...