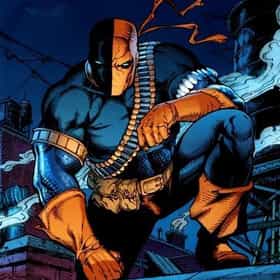 Deathstroke the Terminator is a fictional supervillain, and sometimes antihero, who appears in comic books published by DC Comics. The character was created by Marv Wolfman and George Perez. He is a mercenary and assassin who first appeared in The New Teen Titans #2. Wizard magazine rated him the 24th greatest villain of all time and the 32nd greatest comic book character of all time. Also, in 2009, Deathstroke was ranked as IGN's 32nd greatest comic book villain of all time. Originally a villain for the Teen Titans, writers have developed him over the years as an antagonist for the older heroes Batman and Green Arrow as well, establishing parallels between him and Batman and a ... more on Wikipedia

The Best Storylines That Feature Deathstroke 75 votes When it comes to killer assassins in the DC Universe, you can't get much better than Deathstroke The Terminator himself. For...

Deathstroke is ranked on...

#2 of 176 The Greatest Villains in DC Comics, Ranked 88.9k VOTES Here are the best DC villains ranked best to worst by comic book fans. These popular bad guys in DC Comics are the best...
#10 of 88 People who voted for Deathstroke... Women are 2x more likely to vote for this The Best Batman Villains Ever 141.8k VOTES Batman has, arguably, the greatest rogues gallery in all of comics, so let's rank every Batman villain best to worst! Bad gu...
#3 of 102 People who voted for Deathstroke... People under 30 are 2x more likely to vote for this Comic Book Characters We Want to See on Film 133.1k VOTES   Certain comic book characters definitely lend themselves to film better than others. Sometimes it's their costume...
#1 of 20 Comic Book Characters Who've Studied The Blade 498 VOTES Typically, when people think of comic book characters from Marvel Comics, Image or DC, they don't picture someone holdi...
#118 of 343 The Best TV Villains Of All Time 169.4k VOTES The best TV villains of all time rank among some of the greatest TV characters of all time as well as some of the creepiest ...
#19 of 55 People who voted for Deathstroke... People in the Midwest are 2x more likely to vote for this The Best Superman Villains Ever 26.3k VOTES List of the most notorious villains from Superman's rogues gallery, as ranked by the fans. Superman has as wide array of adv...
#1 of 48 The Greatest Villains Green Arrow Has Ever Faced 4.3k VOTES Green Arrow, whose alias is Oliver Queen, is one of the earliest heroes, having premiered in comic books back in 1941, thank...
#3 of 13 14 Times Batman Got the Crap Kicked Out of Him 2.1k VOTES It's been said that, given enough time to prepare, Batman can beat just about anyone at anything. However, Batman doesn't al...
#1 of 58 The Best Villains the Teen Titans Have Ever Faced 5.4k VOTES We all love Teen Titans, but who are the best Teen Titans villains of all time? The Teen Titans are a group of young, teenag...
#2 of 53 The Coolest Characters from CW's Arrow 28.1k VOTES The CW's Arrow is one of the most popular comic book based shows on network television. Based on DC Comics' Green Arrow...
#5 of 20 The Best Archenemies in DC Comics 8.7k VOTES Archenemy, arch-rival, arch-nemesis whatever you want to call it, it's personal. The yin to the yang, the polar opposite, th...
#10 of 37 The Best Anti-Heroes in Comics 206k VOTES An anti-hero is defined as a leading character in a story who lacks traditional heroic qualities such as idealism, courage, ...
#10 of 15 Ranking Every Batman in the Comics 984 VOTES To the batcave! We’re ranking every Batman in the DC comics universe. Along with all Batman incarnations that appeared ...

Deathstroke is also found on...