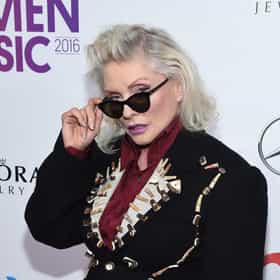 Deborah Ann Harry (born July 1, 1945), born Angela Tremble, is an American singer, songwriter, model and actress, known as the lead singer of the new wave band Blondie. Her recordings with the band reached number one in the US and UK charts on many occasions from 1979 to 1981; the band also had a sixth UK number one hit in 1999. Blondie's song "Rapture" is considered the first rap song to chart at number one in the US. Harry also achieved success as a solo artist before re-forming Blondie in the late 1990s. Her acting career includes credits in over 60 films and television programs. ... more on Wikipedia

Debbie Harry is ranked on...

Debbie Harry is also found on...