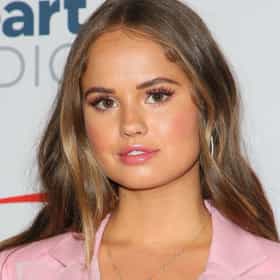 Deborah Ann Ryan (born May 13, 1993) is an American actress and singer. Ryan started acting in professional theatres at the age of seven, and was later discovered in a nationwide search by Disney Channel. From 2008 to 2011, she starred as Bailey Pickett on The Suite Life on Deck and appeared in the 2010 Disney Channel Original Movie 16 Wishes as Abby Jensen, which was the most watched cable program the day of its premiere. Ryan also appeared in the 2010 independent theatrical film What If... as Kim Walker. From 2011 to 2015, Ryan starred as the titular character on the Disney Channel television series Jessie, and appeared in the 2012 television film Radio Rebel as Tara Adams. Since ... more on Wikipedia

Debby Ryan Loves and Hookups 9.7k views Who is Debby Ryan dating? Many famous men have dated Debby Ryan, and this list will give you more details about these lucky ...
The 28 Most Stunning Debby Ryan Photos 71.5k votes Debby Ryan photos, collecting pictures together of one of entertainment's hottest women. She might also end up on the ho...

Debby Ryan is ranked on...

#645 of 3,310 The Most Beautiful Women of All Time 132.1M VOTES Here are the most beautiful women of all time ranked not on looks alone, regardless of their talent. Thi...
#374 of 583 The Most Beautiful Women Of 2019, Ranked 1.4M VOTES UPDATED: Check out the most beautiful women of 2020! This list rounds up the most beautiful women in the world in 2019. Th...
#72 of 155 The Most Beautiful Young Actresses Under 30 1.2M VOTES The most beautiful actresses under 30 are some of the most talented actresses working in Hollywood today. These are all...
#271 of 3,139 People who voted for Debby Ryan... People under 30 are 2x more likely to vote for this The Most Beautiful Celebrities Of Our Time 6.3M VOTES This list of hot celebrities is ranked by pop culture junkies worldwide, making it the best place to find the most attractiv...
#154 of 277 The Sexiest Musical Artists of All Time 350.1k VOTES If you've got it, flaunt it, and that's what these rock stars do. And for that they've been rewarded with the honor of sexie...
#20 of 59 The Most Attractive Redheads Ever 1M VOTES To clarify: this is a list of the best people who have had red hair for as long as we've seen them, not necessarily natural ...
#259 of 415 Maxim's Nominees for the 2015 Hot 100 191.4k VOTES Here are Maxim's nominees for the 2015 hot 100. This is the issue of Maxim that gentlemen around the world look forward to m...
#82 of 122 Who Was America's Sweetheart in 2017? 69.3k VOTES These female celebrities are the most desirable girlfriends of America, but only one can be American's girlfriend in 2017. T...
Famous People Whose Last Name Is Ryan 12.6k VIEWS Being a fairly common name, it's no surprise there are a lot of famous people with the last name Ryan. Do you recognize all ...
Celebrities You Didn't Know Are Bilingual 52.9k VIEWS This list of celebrities who are bilingual is loosely ranked by fame and popularity. Several famous actors, musicians, and a...
Teen Actors Whose First Kisses Were for Filming 46.2k VIEWS Even for non-celebrities, most first kisses are totally awkward. Now imagine being an actor whose first kiss was while filmi...

Debby Ryan is also found on...